We started the day super early getting up at 4.30 am to be ready to leave L.A at 5am, as we would miss our continental breakfast (doesn’t start till 6am) Greg suggested going to iHop as its open 24hrs and who doesn’t love pancakes! Unfortunately there was a sign saying closed for 2hrs! Bummer, we’ll have to go another day.

Really this worked in our favour as it gave us an even earlier head start to the canyon, L.A was dead quiet at 5am and we were glad for this, heading out to the freeway we made our way out of L.A (this took a long time L.A really is big!) whilst driving the 8 hours and making our way to the canyon, there really was so much to see and look at most of the way. We watched the scenery change completely like 5 different times, turning to massive mountains covered in fog in the distance to flat brown dessert, to rocky mounds and giant hills stretched up everywhere, turning again to mountains, even some greenery and then back to dessert again, this was a nice way to wind down after 3 crazy days in the craziest city! We played games such as I spy (this didn’t last too long) and then decided to have a competition and count colours of trucks and cars, Greg chose Blue and I chose red, Playing for almost three hours straight one stretch I won seeing 169 full red vehicles and Greg came second claiming that I cheated with 151 blue vehicles. Stopping for a break we decided on Burger King as you could get two double beef or chicken burgers for $5! so cheap, we also stopped at The Big K (kmart) to grab a few things like hats, alovera (yes I got sunburned yesterday) and some snacks.

The last 2 hours were the hardest as we were getting really tired but we finally made it to our hotel (The Grand Hotel) its really nice here, they have a pool (thats freezing!) and a hot tub which we got in but only for 10 minutes as its steaming hot! They have a giant stuffed moose above a fireplace in the common room, the rooms are lovely and we have a super comfortable king sized bed. Heading out to the viewing area for the grand canyon that afternoon we spent the rest of the daylight hanging out on a cliff face by ourselves for most of it, (which was hard to find with all the tourists here) whilst Greg took a stop motion video of the sunset, this was so enjoyable just relaxing and looking down into the depth of the canyon. We didn’t bring jumpers out and it was absolutely freezing by the time we left to catch the bus back to our hotel! Both of us napping on the bus oops! Haha.

It was now nearly 8.30 and by the time we were seated in the Star Steak house we were starving! The food sounded amazing so we ordered an entree of calamari with house salsa, and mains were half rack pork ribs for Greg & something called Jambalaya for me. Unfortunately we really only enjoyed the complementary bread basket served to start, mine was so hot & spicy! I had about four mouth fulls (it didn’t say anything about spicy on the menu) and Gregs pork was not cooked well and the sauce was not to our taste (he did eat it all tho) also half the calamari plate was battered baby octopuses! Yuk! We were very disappointed to waste the food and money. Now it was time for bed after a quick shower, could not even keep my eyes open to write this blog post on the same day!

Thanks for reading
Nicole & Greg

Yes those are mountains hiding in the fog and clouds.

It was so foggy!

Our helpful sometimes frustrating GPS which we could not do without! 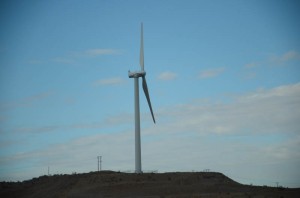 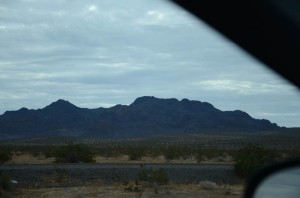 The mountains were actually black!

Lots of long trains on the drive 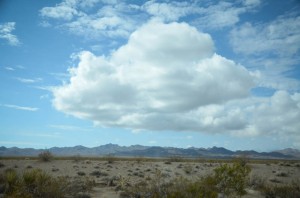 I really liked the big cloud

Random fancy house with green grass in the middle of everything else being just sand and rocks. 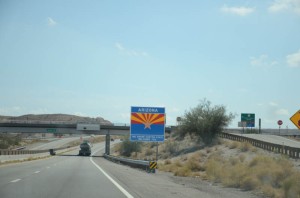 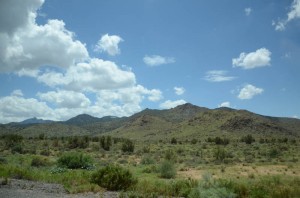 Just amazing! made me dizzy when I first saw it!

Me at the edge!